As a standard practice, I make a habit of examining my email spam folder to study what tactics are sending electronic missives directly to the junk folder. Not long ago, I was amused but not particularly surprised to see emails from Donald Trump and newly-minted campaign manager, Kellyanne Conway.

I was not surprised my spam filter caught these emails because I’ve previously written about one particularly egregious spam tactic the Trump campaign has employed, buying lists.

Eric Owens wrote a piece for The Daily Caller about the mass email from Kellyanne Conway after she was named campaign manager that was sent three times in the span of 27 hours. I got that email, which came from the DonaldTrump.com domain, and went sight-unseen until I discovered it in my spam folder. 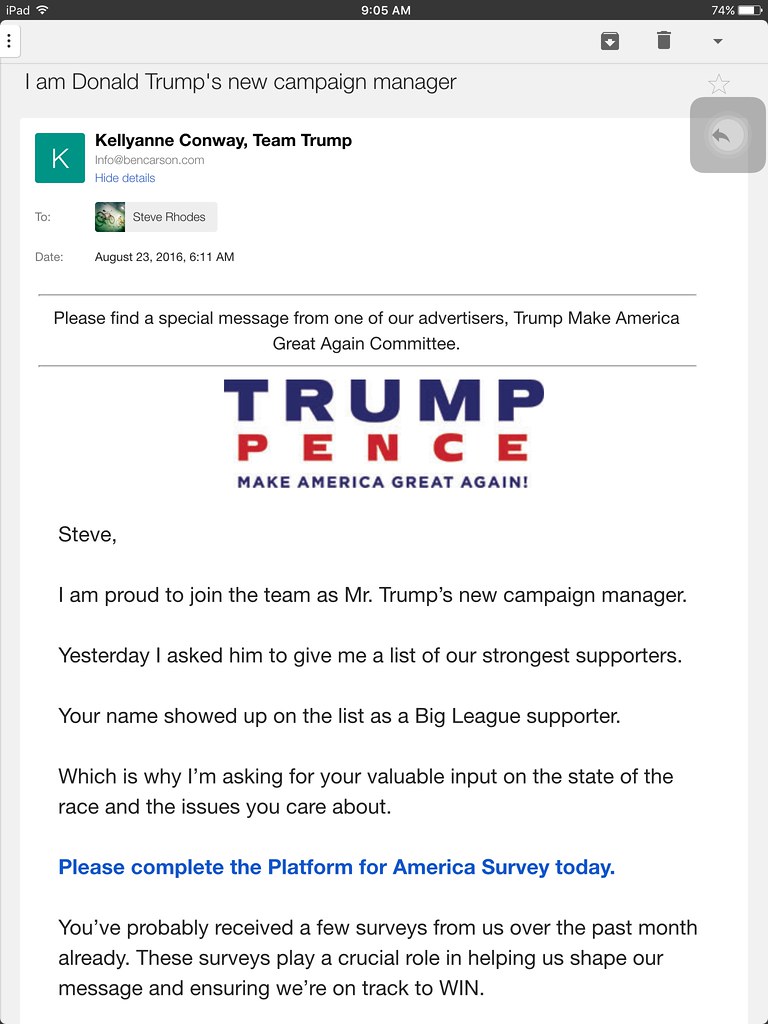 Owens points out that the emails The Daily Caller received came from email@gop.com and replyto@victorymailings.com.

I currently have eight emails in my spam folder from the Trump campaign, sent from Donald J. Trump, Karl Rove, Newt Gingrich, Ben Carson, Patrick somebody, Jessica somebody, and Jim somebody.

I can assure you, I signed up for none of these emails. Believe me. The giveaway is the email address to which they were sent, which uses my personal email address I explicitly do not use to subscribe to things, especially not political campaign emails which are notoriously difficult to get off of.

Another giveaway that the Trump campaign is spamming me is the name they use in the preview text to personalize the emails. Look at the screenshot of my inbox above, and you’ll notice that they call me Dee, which is obviously not my name but could be a good guess were someone tying to surmise it from the structure of my email address.

As noted in Kellyanne Conway’s fundraising appeal, she states that my name came up on a list of Donald Trump’s strongest supports, which could not be further from the truth. I believe Donald Trump is a clear and present threat to the very survival of American democracy and an affront to all that is good and decent in this world.

So how did I end up as “a Big League supporter,” if you believe Kellyanne Conway? If by “Big League supporter” she means anyone on the Trump mailing list, then I guess I qualify even though I never signed up for any of these emails. The logical conclusion is that my email address was included on the spam list the Trump campaign so obviously purchased after failing to collect the email addresses of his supporters during the primaries.

In addition to the domains sending Trump spam mentioned above, the sending addresses I’ve received emails from include:

So why is Gmail sending all the emails from the Trump campaign directly to my spam folder when both blacklisting services I checked did not list most (not all) of the aforementioned emails? (It should be noted here that political campaigns are explicitly exempted from CAN-SPAM laws, which might explain Spamhaus results.)

Google has access to more than just the data that blacklisting services can provide. First and foremost is the behavior of their users themselves. If a significant percentage of Gmail users hit the spam button whenever they get email from the Trump campaign, that behavior itself will trip Gmail’s own internal spam algorithm.)

If the Trump campaign did as I suspect and bought an email list and did not even perform the basic political campaign practice of cross-referencing it with voter files to clean it of people who will obviously not vote for Trump, then the obvious reaction of Democrats receiving campaign email from Donald Trump will be to hit the spam button.

Also, Gmail knows my name is David, not Dee, so the fact that the Trump campaign is using an incorrect name for emails it sends me is likely a spam trigger in itself.

So, sending mass emails to a purchased list that was not cleaned was the first and most significant violation of email best practices by the Trump campaign.

But it is certainly not the only violation. Let us count the others.

Look at the prefixes of all the email address the Trump campaign is using to send email:

While these types of email addresses aren’t spammy per se, coupled with other signals they can be a contributing factor for increasing a spam score within an algorithm.

More importantly, email recipients are psychologically more likely to interact with emails sent from address that imply an individual sent it rather than an impersonal address like info@. Interactions with emails such as opens and clicks on links are signals that demonstrate people are interested in the email and thus mitigate against spam scores.

The Trump campaign has been run figuratively in ALL CAPS mode from the beginning, so it shouldn’t come as a surprise that its emails use all capital letters liberally. Here’s an example from an email sent by Donald Trump:

All caps used in that email:

This is a sample of some of the spam trigger words I found in the Trump campaign emails:

This is an easy tactic for spam filters to sniff out because it is easily read in the HTML code that declares a background color for a block of text. It is a tactic of which the Trump campaign is particularly fond.

In this example from an email from Karl Rove, he not only highlights a block of text with blue, that block of text is also in ALL CAPS. You’ll also notice the repeated use of the dollar symbol, which is a spam trigger:

Patrick is worried I’ll look like a fool for being the only Trump supporter in my neighborhood without a yard sign. Silly Patrick.

This is common knowledge among email marketers, but somehow it is not surprising the Trump campaign likes this tactic. Examples:

Newt Gingrich warns that Republicans can’t win this without me:

Patrick reminds me that all the Trump yard signs are “proudly made in the U.S.A.!” (From the guy who produces every one of his products in China.)

Jim is going full-urgency on me with lots of red text (and plenty of CAPS) because I haven’t ordered a lawn sign yet.

With all the CAPLOCKS action, the bolding, the underlining, the highlighting and the red text, what does that remind you of?

A direct mail letter? Exactly! It looks like the Trump campaign is using direct snail mail letter marketing as a guide for their email marketing.

7) Burying The Email Footer With Lots Of White Space

This is another common spammy tactic. The idea is to put the unsubscribe link (located in the footer) well out of sight of the email recipient to make it hard for them to unsubscribe.

It’s a stupid and short-sighted tactic because 1) if people can’t find a way to legitimately unsubscribe, they will use the spam button out of spite, frustration, or both and that in itself will send a signal that the email is spam, and 2) email providers spam algorithms can easily tell through the code when this tactic is being used, so you’re fooling no one and still getting tagged as a spammer.

I had to reduce the screen to 25% of the original in order to capture all the white space in this screenshot:

You’ll see in the screenshot below that the email urging me to order a Tump lawn sign is accompanied by the following hyperlink: https://contribute.nrsc.org/trump-pence-patriotic-yard-sign/

However, when you hover your cursor over that link, you’ll notice in the bottom left-hand corner of this screenshot that the link actually points to a URL at the domain name granitelists.com, which is a Republican fundraising firm.

This is a common tactic of email scams. They display what looks like a legitimate URL through the anchor text of the hyperlink while actually pointing the hyperlink to a different URL.

This, too, is a tactics that is quite easy for spam algorithms to sniff out.

There you go. Eight email worst practices employed by the Donald Trump campaign that are resulting in his emails being sent directly to the spam folder.

I could list more but this should give you a very good idea of how much of an amateur hour it is over at Trump Tower in terms of online marketing.