How To Use Voice Tweets

The world now has an entirely new format to tweet with: The Voice Tweet. This is yet another advancement in the trend toward audio marketing.

Twitter has begun rolling out a new feature that allows users to record audio for use in their tweets. It is currently available to some iOS users and I, happily, have access to the new feature and have put it through its paces.

It is quite easy, actually.

Open up Twitter's iOS app and tap the familiar Tweet icon. That will open up the Twitter composer. If you have access to the new voice tweet feature, you'll notice a new waveform icon in the lower lefthand side of the composer. 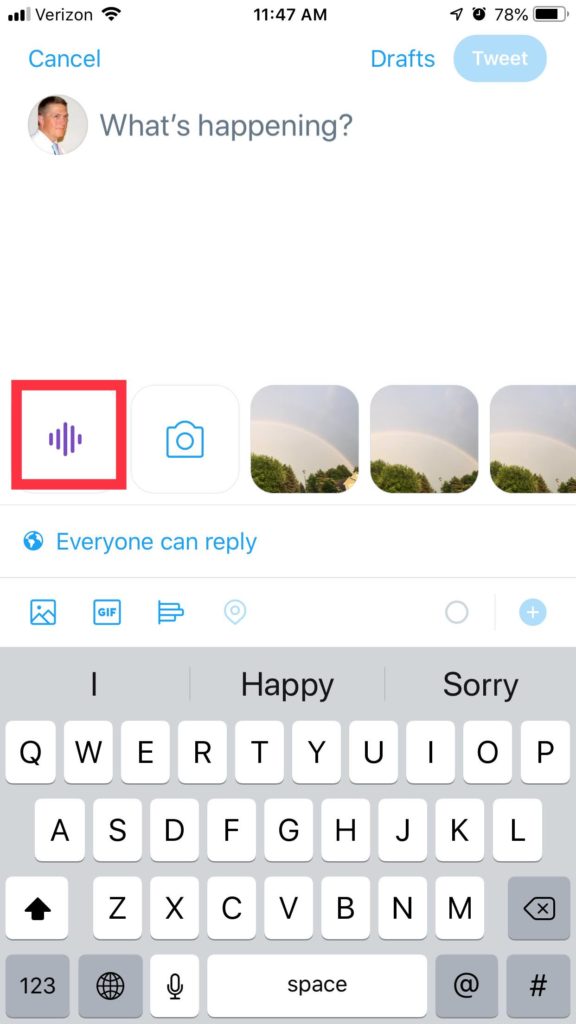 2. Tap The Microphone Icon To Record

After you tap the new waveform icon, you'll be taken to the audio recording screen where you'll see a big red microphone button. Tap that button to start recording. 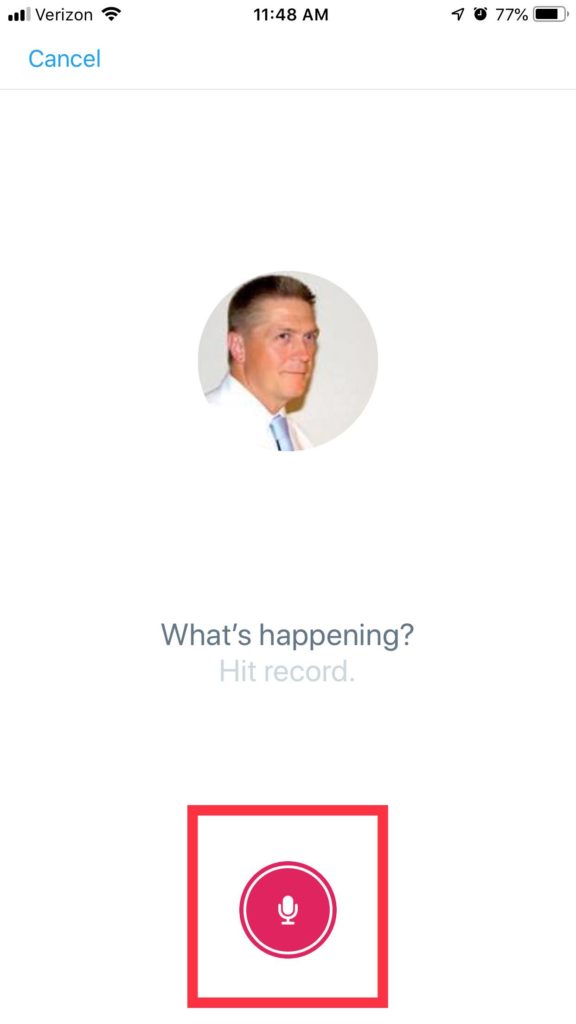 After you start recording, the top of the screen will read "Recording" and your Twitter profile photo will pulsate around the edges to give you a visual cue that the audio is actually being captured.

You'll also notice that the big red microphone icon has changed into a big red pause button. That is very convenient because it allows you to record short audio snippets at a time and gives you a chance to think about what you want to say before commiting it to audio.

You cannot, however, replay what you've just recorded before you publish. That's a huge drawback. 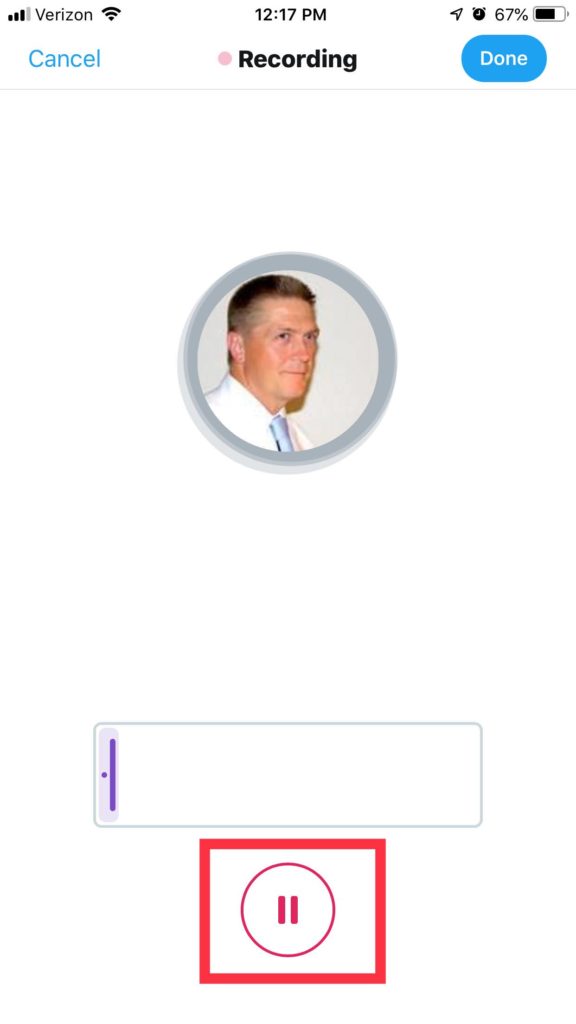 As you record your audio tweet, it will be reflected visually as a waveform across the bottom of the recording screen. Twitter allows 140 seconds of audio. If you go over two minutes and twenty seconds, it will automatically start another tweet with another recording and will chain the tweets together with a tweetstorm thread.

When you are done recording, tap the Done button in the upper righthand corner. Twitter will render the audio and include it in a tweet, to which you can add text to frame the audio clip for your audience. 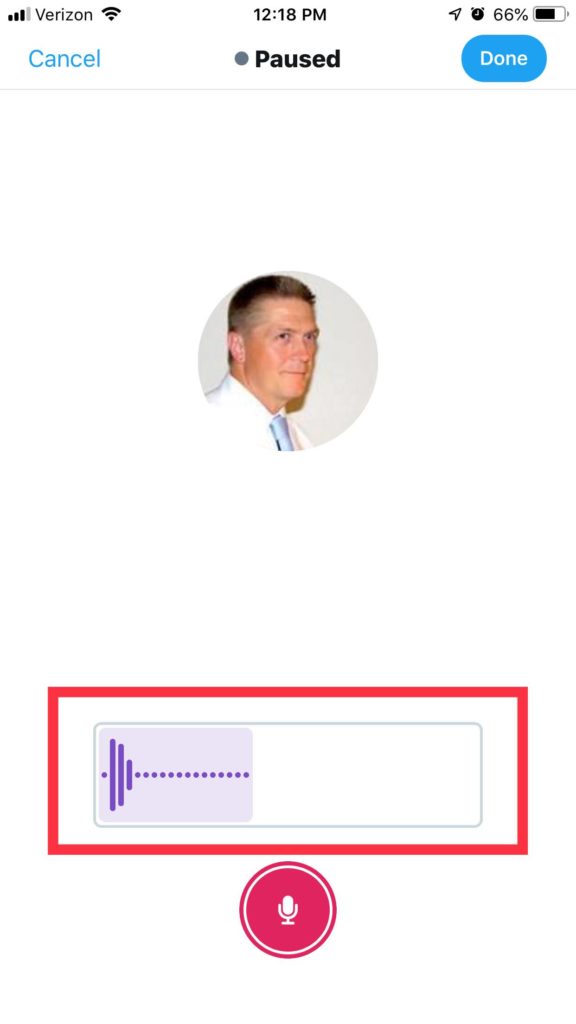 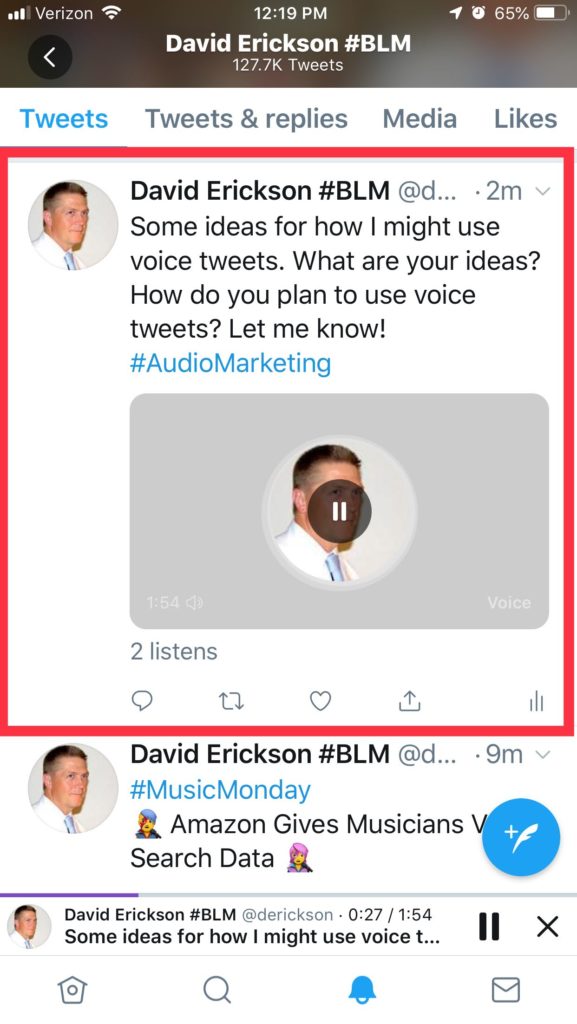 Users can tap the play button to listen and it will continue to play as they scroll through their feed. 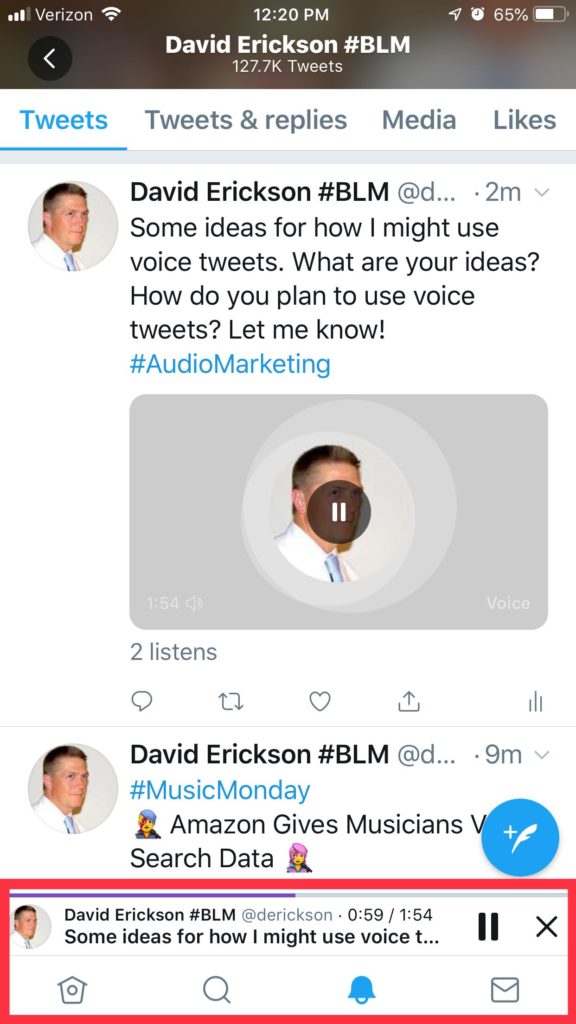 As of now, you cannot natively reply to a tweet with a voice tweet. I came up with a workaround, though.

Here's how you do it: 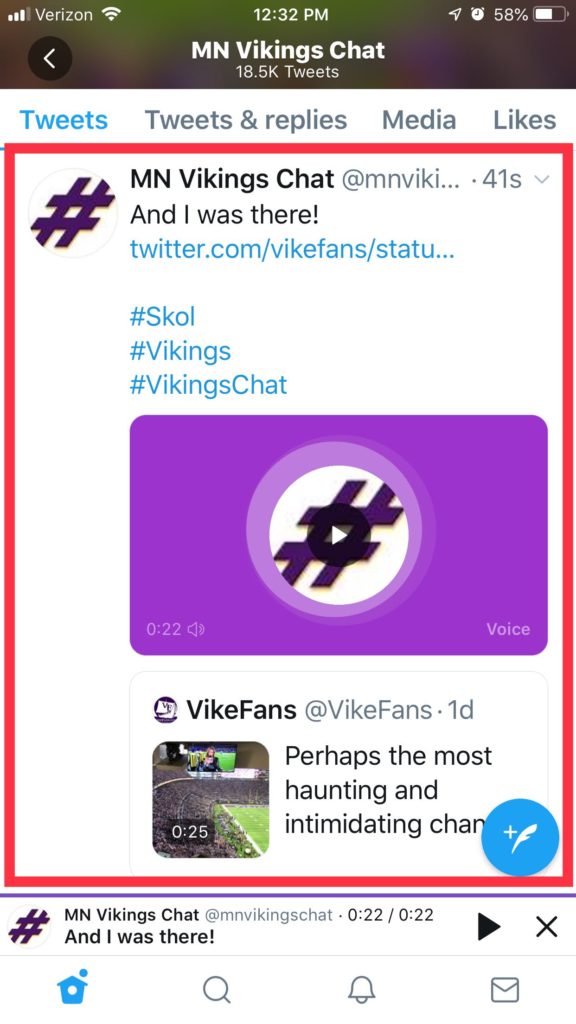 I discussed voice tweets with my Beyond Social Media Show co-host B.L. Ochman during this week's Episode 312:

BL Ochman: I mean, I actually have mixed feelings about this one and I will tell you why. But Twitter is adding voice tweets. And this is from Twitter's blog; the story's by Maya Patterson and Rémy Bourgoin. And starting today on iOS only for now, tweeting with your voice is rolling out to some users.

To start, you open up the tweet composer and you tap the new icon that has wavelengths on it and you see your profile photo and the record button at the bottom and you tap to record your voice. Each voice tweet captures up to 140 seconds of audio. So if you have more to say, you keep talking and once you reach the time limit, a new voice tweet starts automatically and it creates a thread. Once you're done, you tap the Done button and then you end your recording and you go back to the composer screen to tweet.

Where Users Will See Voice Tweets

So people are going to see your voice tweet appear on timeline alongside other tweets. To listen, you tap the image. On iOS only playback starts in a new window docked at the bottom of your timeline and you can listen to as you scroll. You can also keep listening while doing other things on your phone or while you're going around.

There's a lot that can be left unsaid or uninterpreted using text, so Twitter said they hope that voice tweeting will create a more human experience for listeners and storytellers alike, whether it's a storytime about your encounter with wild geese in your neighborhood; a journalist sharing breaking news; or a first-hand account from a protest.

I think certain politicians will just go on and on. Kinda like the way they do when they have a press conference that goes on rambling for hours. I think that a lot of angry people will keep talking. I think that what has always made Twitter, Twitter is that there is a limit on how much content you can add. I mean, you know that I wanted 140 characters to always be the thing. They made it 280 and you know, so I do some longer tweets, but the point is, it will be abused.

David Erickson: So, do you know who Vera Lynn is?

David Erickson: Vera Lynn is...was; she died today at 103 years old. She was a famous British singer, who was very popular during World War Two and her most famous songs you probably have heard of them. Were White Cliffs of Dover and We'll Meet Again. And so she was kind of the voice of Britain.

David Erickson: She...just beautiful songs during a time that was the darkest for the people of Britain. She was lifting up people's spirits with her with her voice. So I say that because I have the tweet by voice.

BL Ochman: Did you sing?

David Erickson: I tried it out and I sang, yes. Actually, I sang Pink Floyd's Vera which goes: Vera, Vera, what has become of you? Does anybody else in here feel the way I do. So, it's a Roger Waters song about Vera Lynn, which is where I first learned about Vera Lynn. So I sang that. And the problem with it from just an operational...from a logistics standpoint is there's no replay. You can't just go back and listen. Okay, did I do that okay?

BL Ochman: No, there's no edit on Twitter. I mean, everybody was saying, oh, give us an edit button. That's what you really need. I mean, you know, you make a mistake. You have to delete your tweet and go back and redo it correctly.

Too Much Room For Voice Tweets?

David Erickson : I couldn't go back and review what I just sang. But I wanted to try it out, so I did it and I posted it and it wasn't nearly as good as I'm capable of singing. But yeah, it seemed like--so there's a small little clip and there's a lot of room. And so you say it's 140 seconds, is that what you said?

David Erickson: It is a long time yeah and you know the people who use up...it's like the people who don't know how to, don't have a phone etiquette. And they fill your voice mailbox with a long, lengthy... It's like that. People won't listen to them; they'll just delete them. I don't think that's really as much of a problem as you.